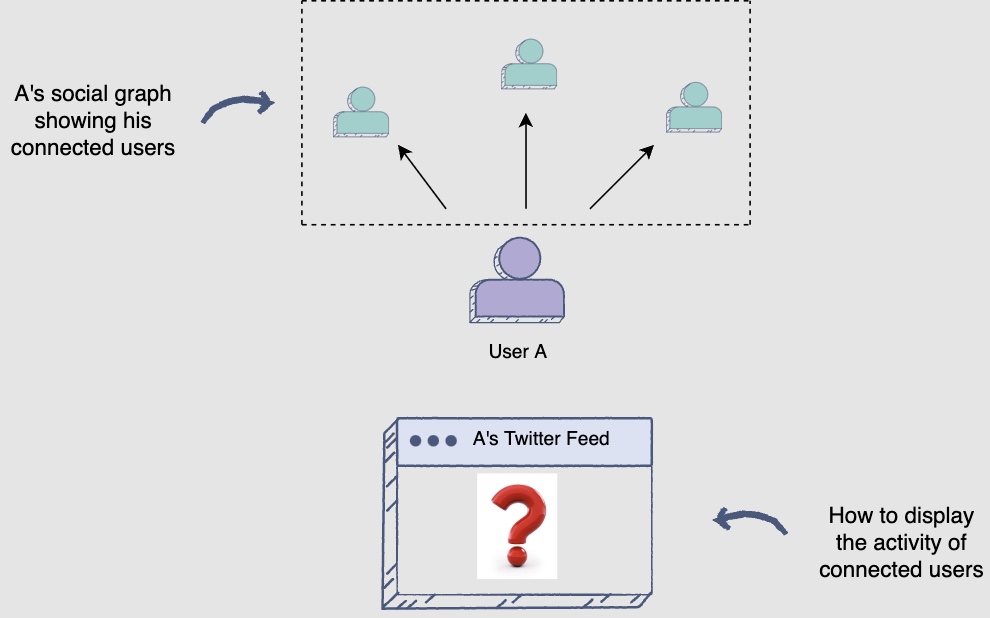 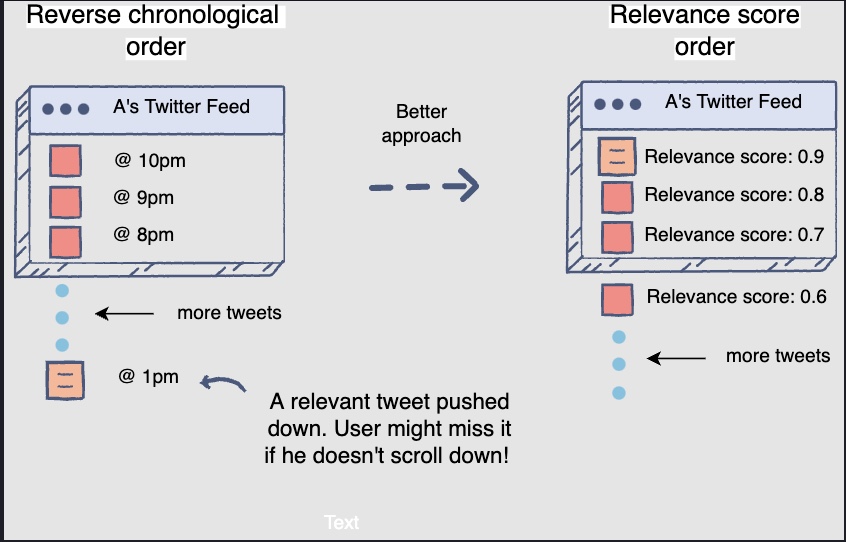 All of the metrics we are going to discuss can be used to determine the user engagement of the feed generated by our feed ranking system. 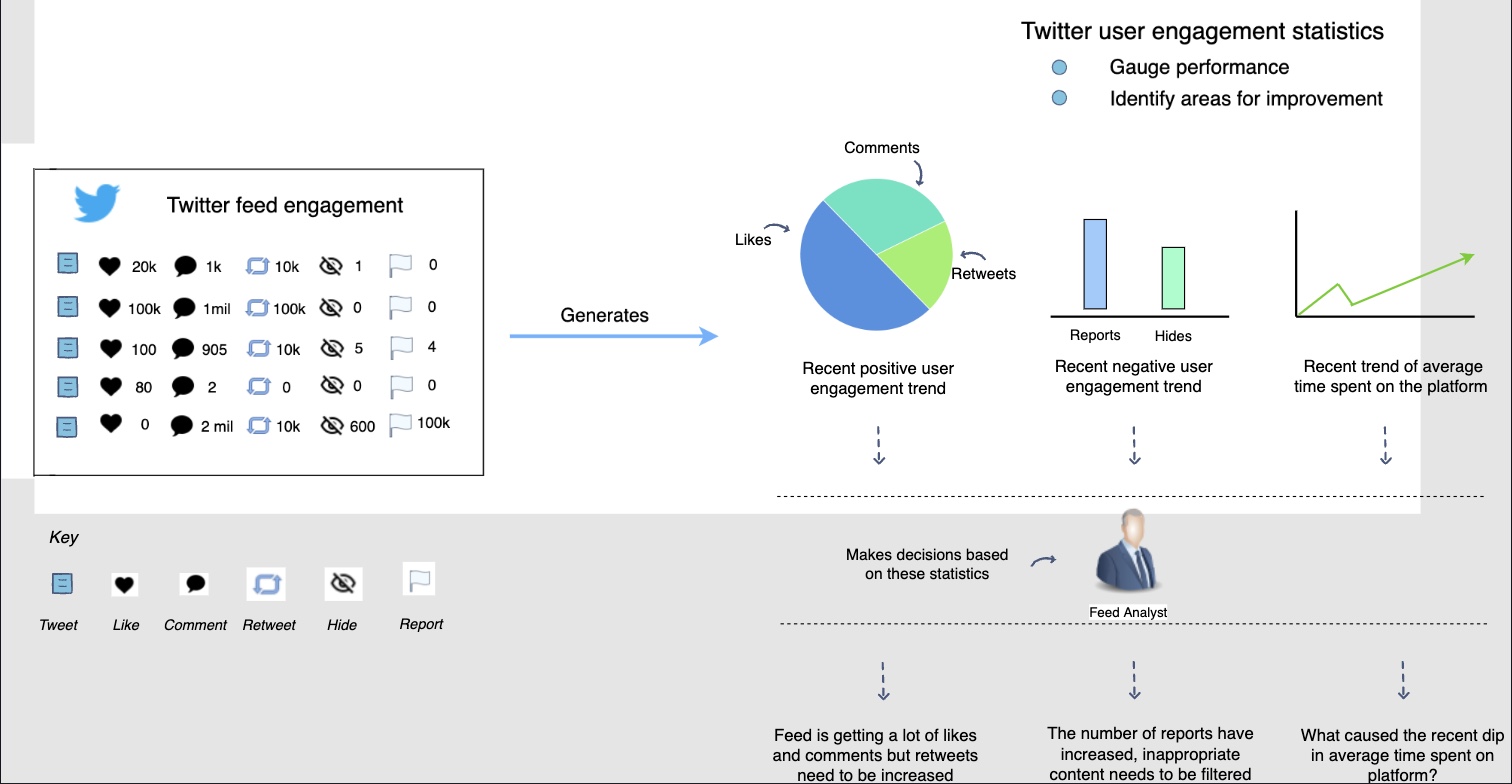 These weights are assigned, keeping in mind the respective importance of different forms of engagement towards the business objectives. 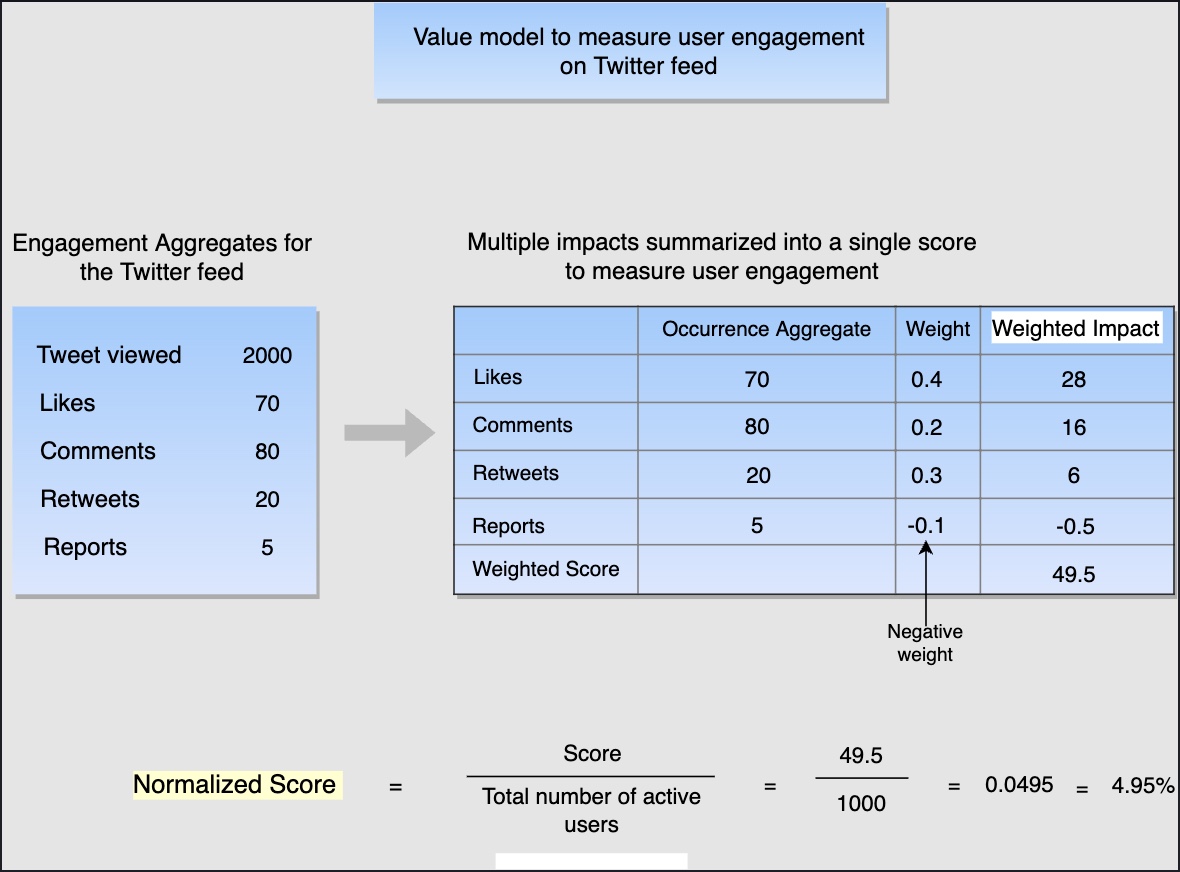 A not-so-new post! Consider a post that user A has viewed previously. However, by the time the user logs in again, this post has received a much bigger engagement and/or A’s network has interacted with it. In this case, it once again becomes relevant to the user due to its recent engagements. Now, even though this post isn’t new, the post selection component will select it again so that the user can view the recent engagements on this post. 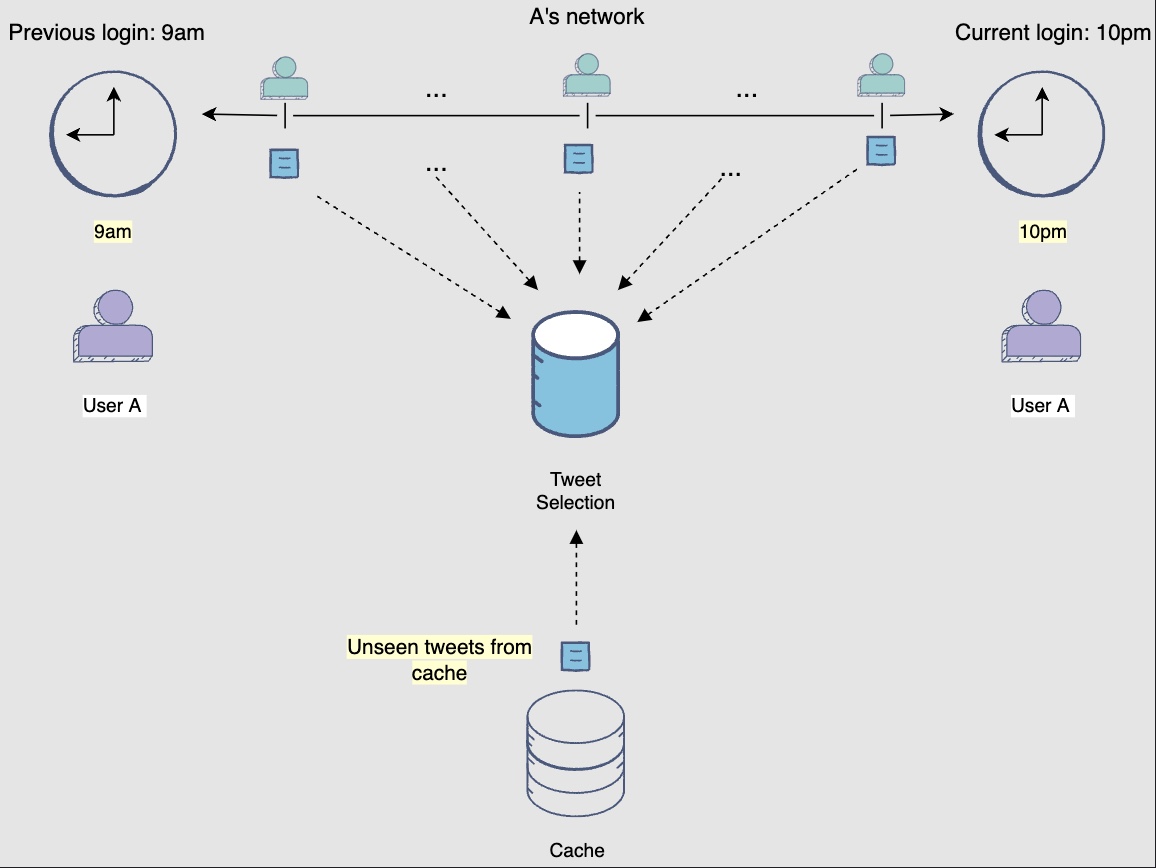 Edge case: User returning after a while 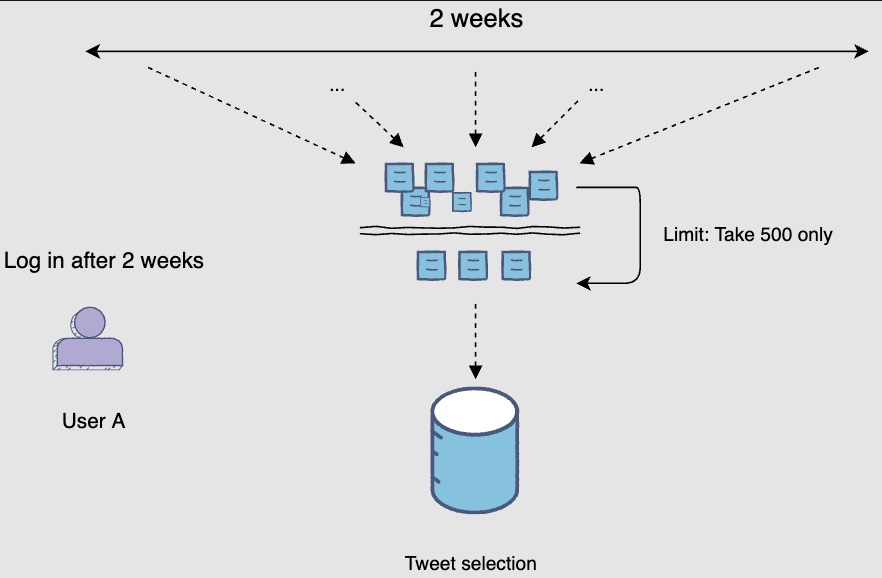 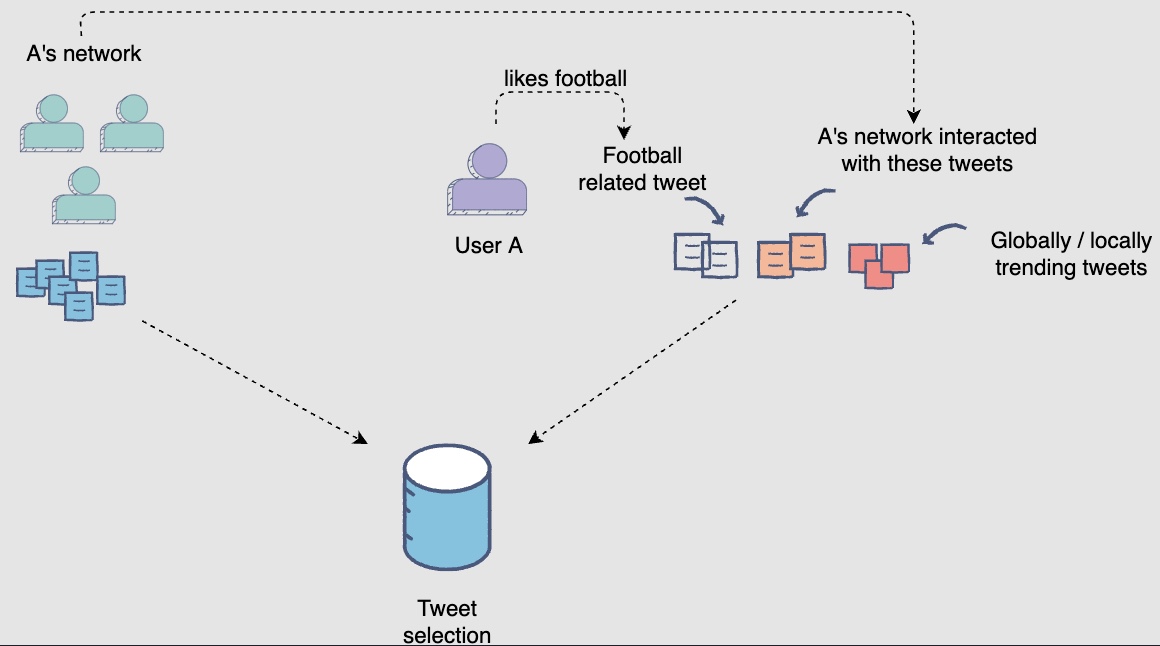 All of the schemes we have discussed showcase the dynamic nature of the post selection component’s task. The posts it will select will continue to change each time. 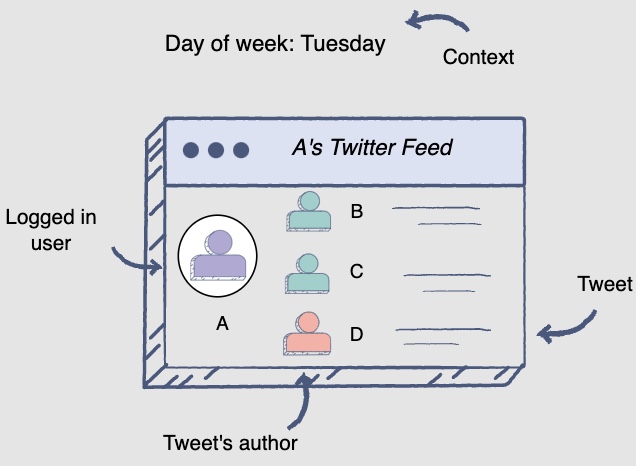 Features based on post’s interaction

Historical trend of interactions on the author’s posts

A high rate of historical interaction for a user implies that the user posts high-quality content.

These features don’t necessarily have to be based on data from three months, but rather you should utilize different time ranges, e.g., historical engagement rates in last week, month, three months, six months, etc. 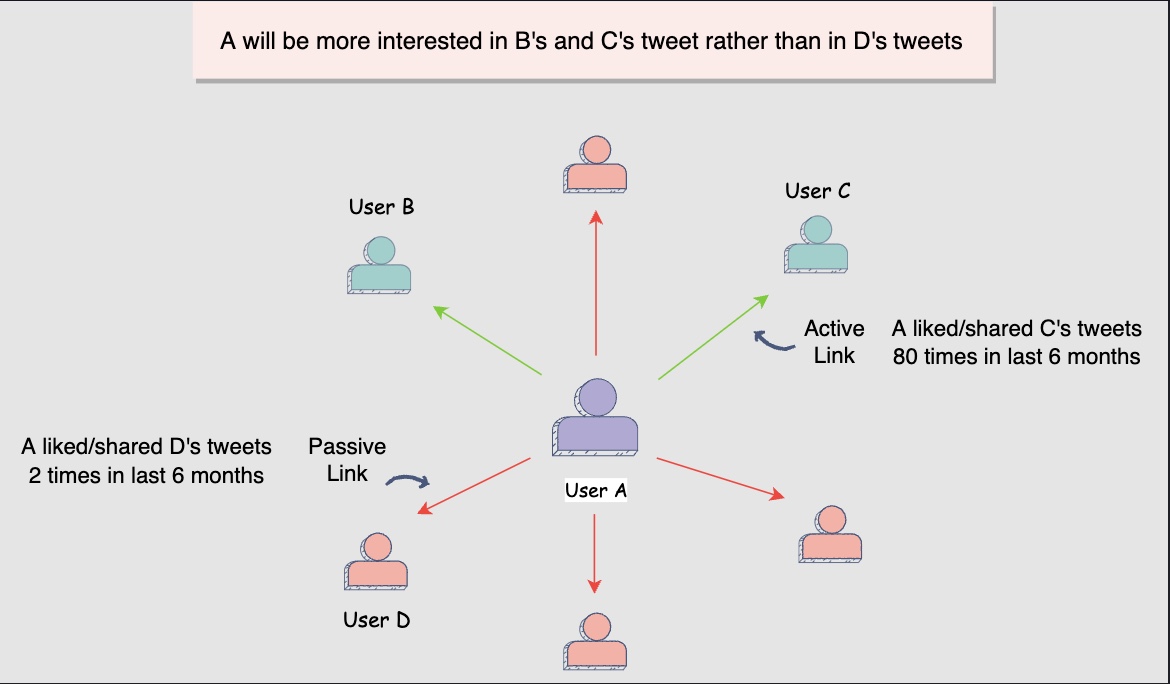 Ideally, we should normalize the above features by the total number of posts that the user interacted with during these periods. This enables the model to see the real picture by cancelling out the effect of a user’s general interaction habits. For instance, let’s say user A generally tends to interact (e.g., like or comment) more while user B does not. Now, both user A and B have a hundred interactions on user C’s posts. User B’s interaction is more significant since they generally interact less. On the other hand, user A’s interaction is mostly a result of their tendency to interact more.

Note that the term training data row and training example will be used interchangeably. 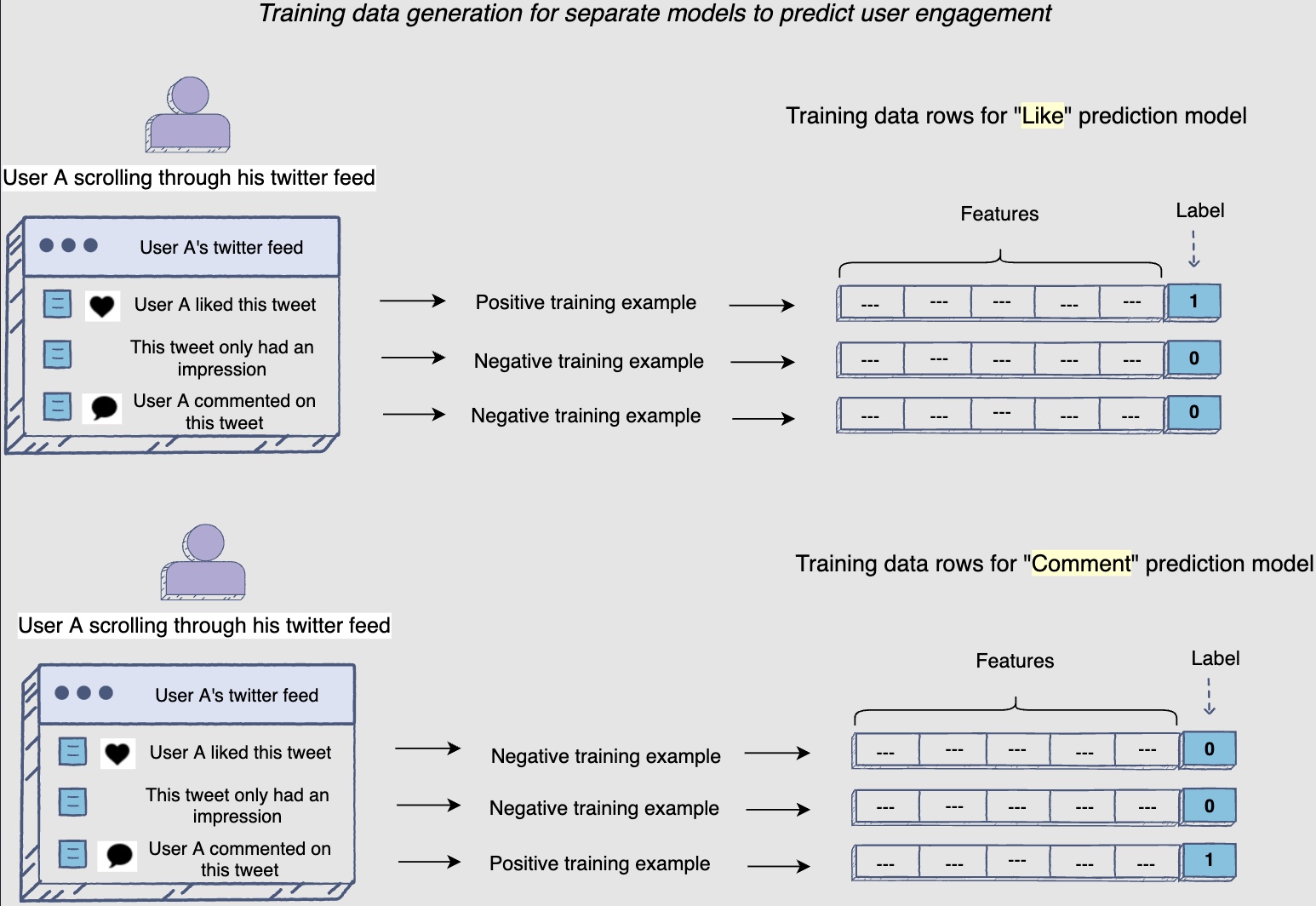 Note: If a model is well-calibrated, the distribution of its predicted probability is similar to the distribution of probability observed in the training data. However, as we have changed the sampling of training data, our model output scores will not be well-calibrated. For example, for a post that got only 5% engagement, the model might predict 50% engagement. This would happen because the model is trained on data that has an equal quantity of negative and positive samples. So the model would think that it is as likely for a post to get engagement as it is to be ignored. However, we know from the training that this is not the case. Given that the model’s scores are only going to be used to rank posts among themselves, poor model calibration doesn’t matter much in this scenario. We will discuss this in the ads system chapter, where calibrated scores are important, and we need to be mindful of such a sampling technique. 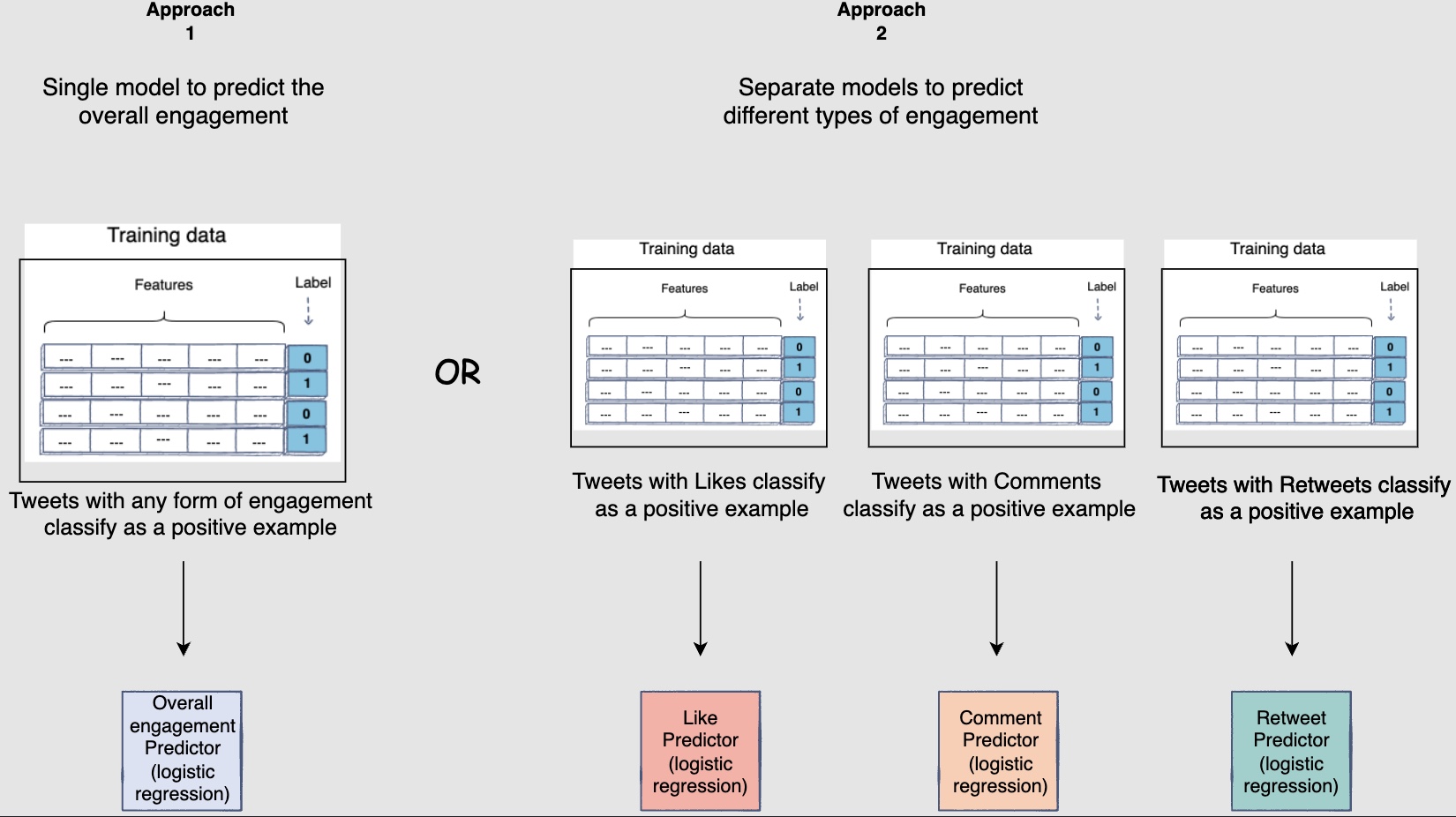 As with any modelling, we should try and tune all the hyperparameters and play with different features to find the best model to fit this problem. 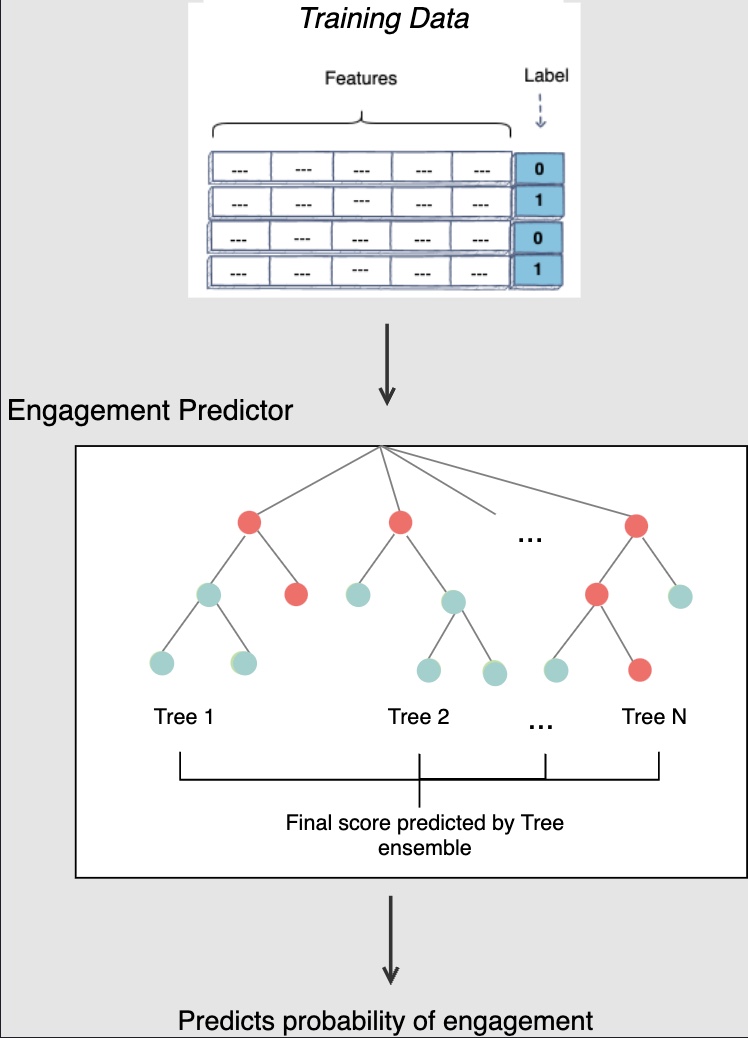 Approach 2: Specialized predictor for each type of user engagement 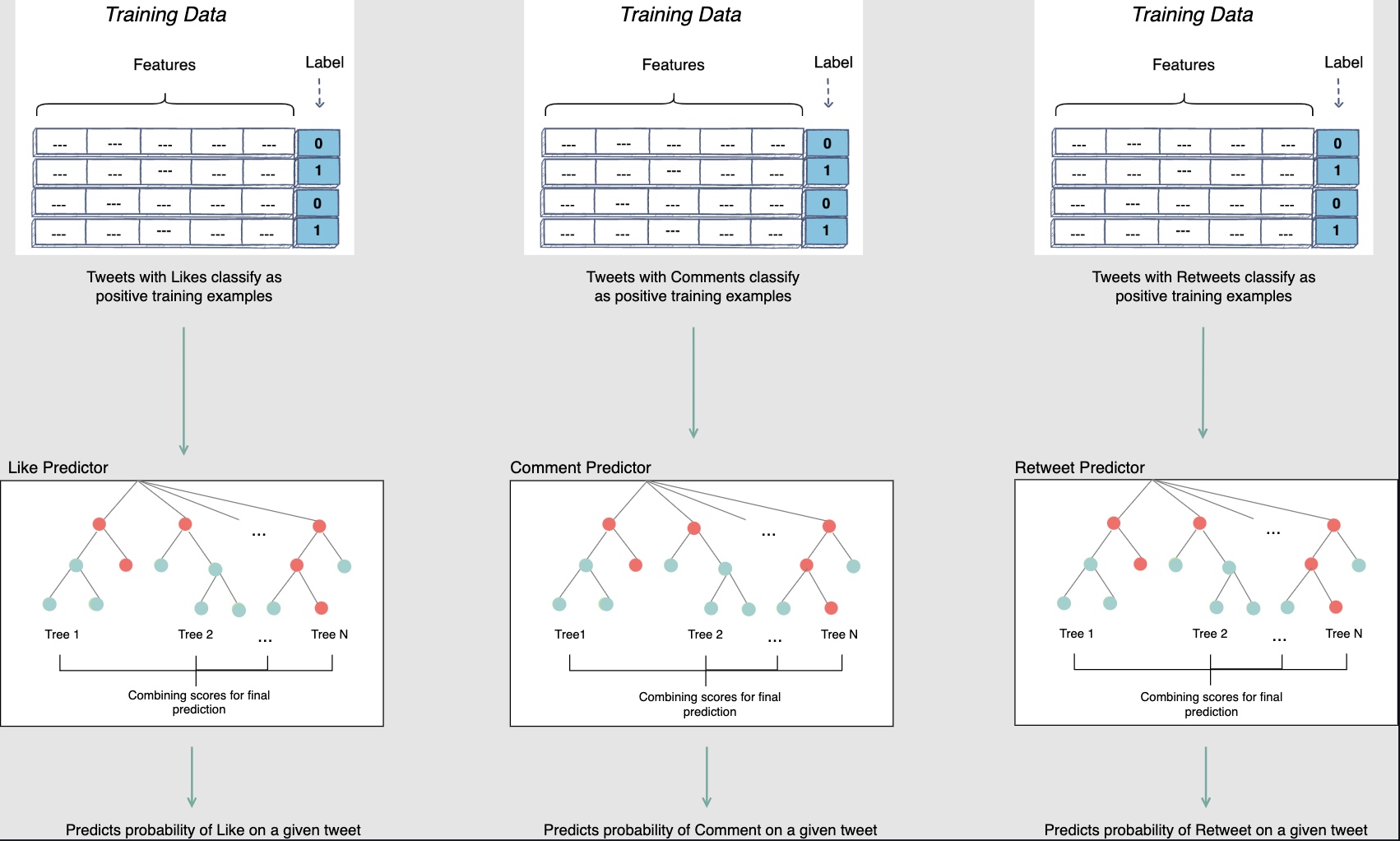 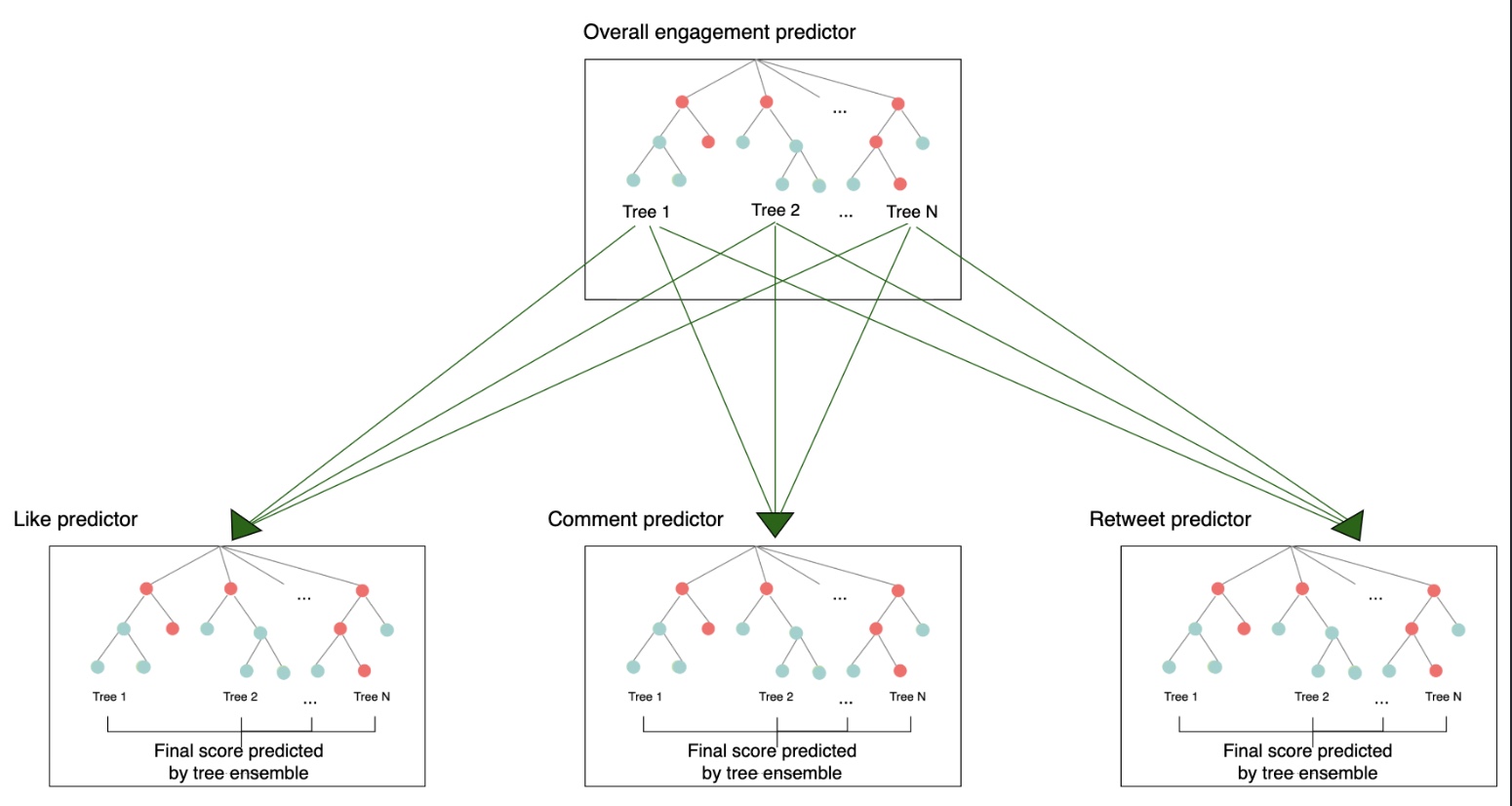 Neural networks are a great choice to add all the raw data and dense features that we used for tree-based models. 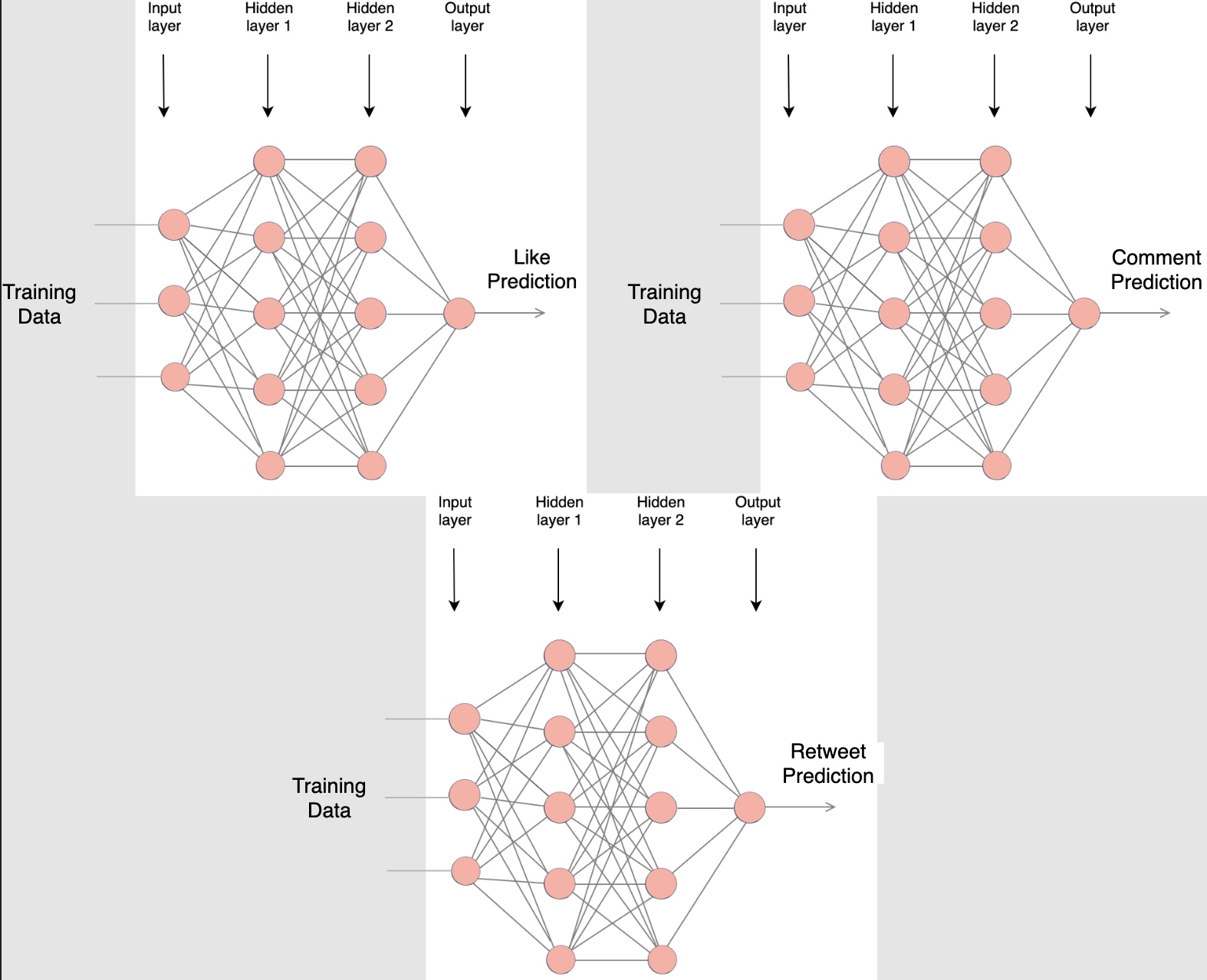 Given the training time is slow for neural networks, training one model (shared layers) would make the overall training time much faster. Moreover, this will also allow us to share all the engagement data across each learning task. THe following diagram shows the multi-task neural network configuration where the specialized layers share the initial layers: 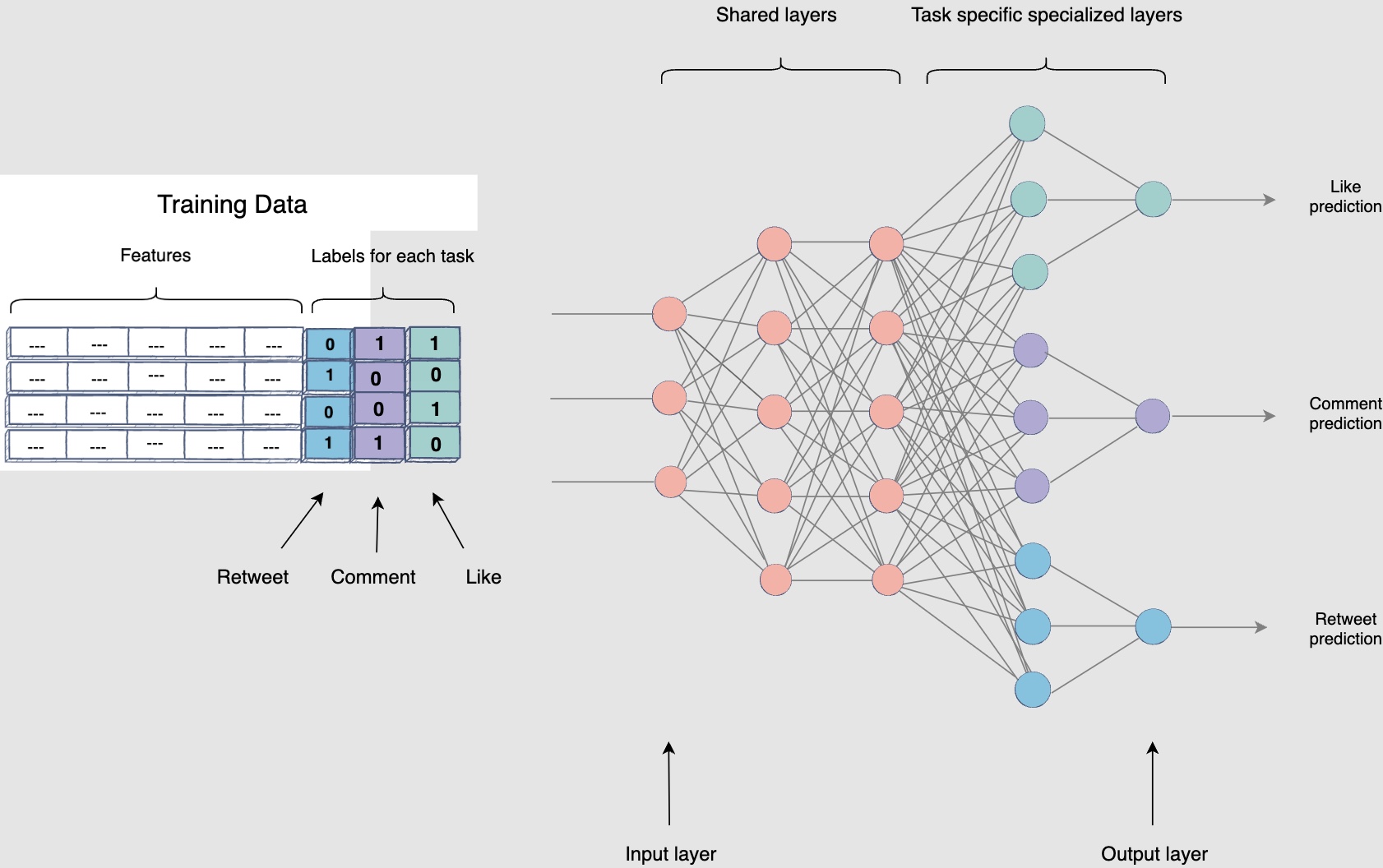 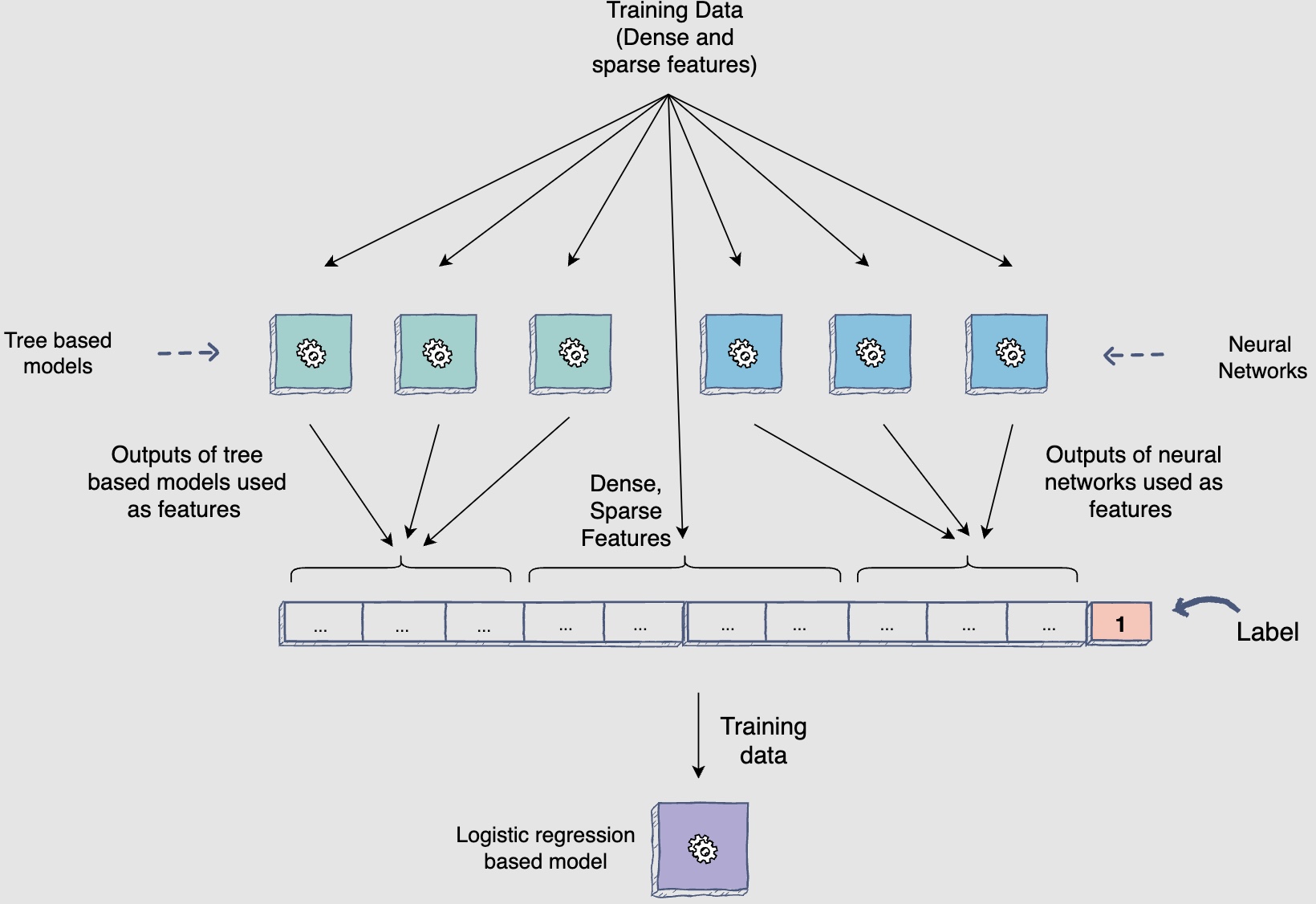 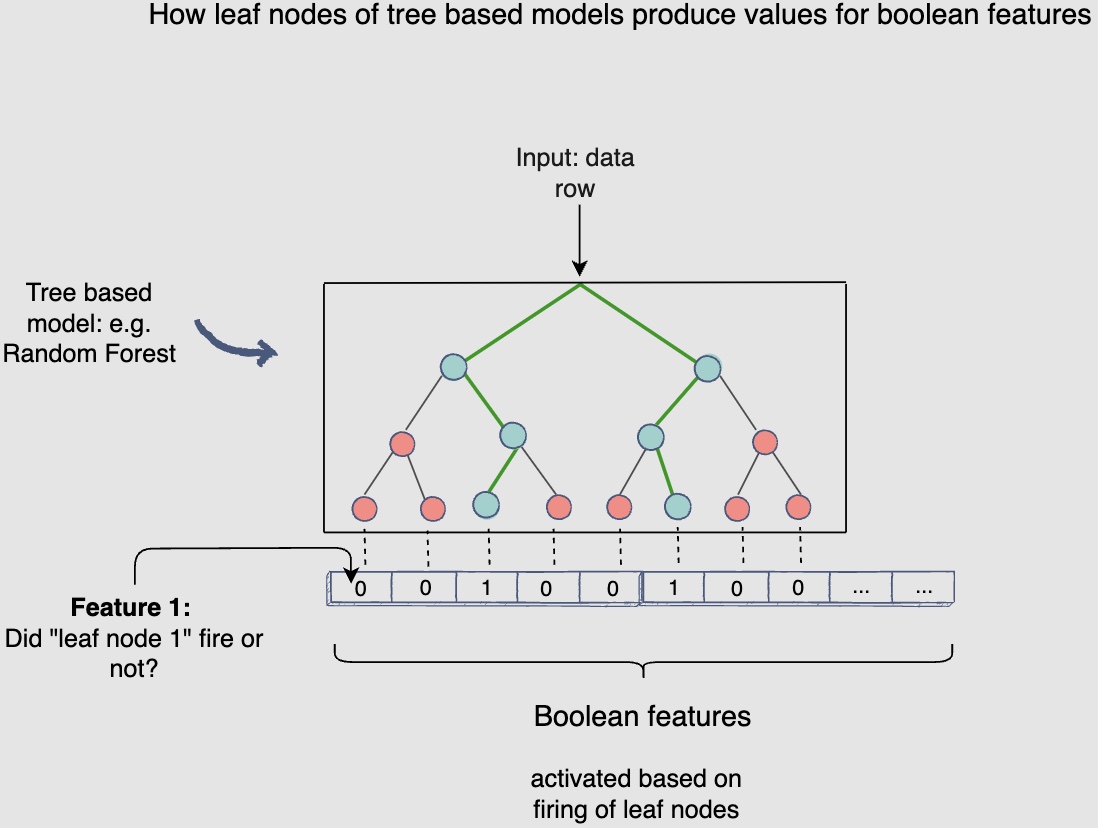 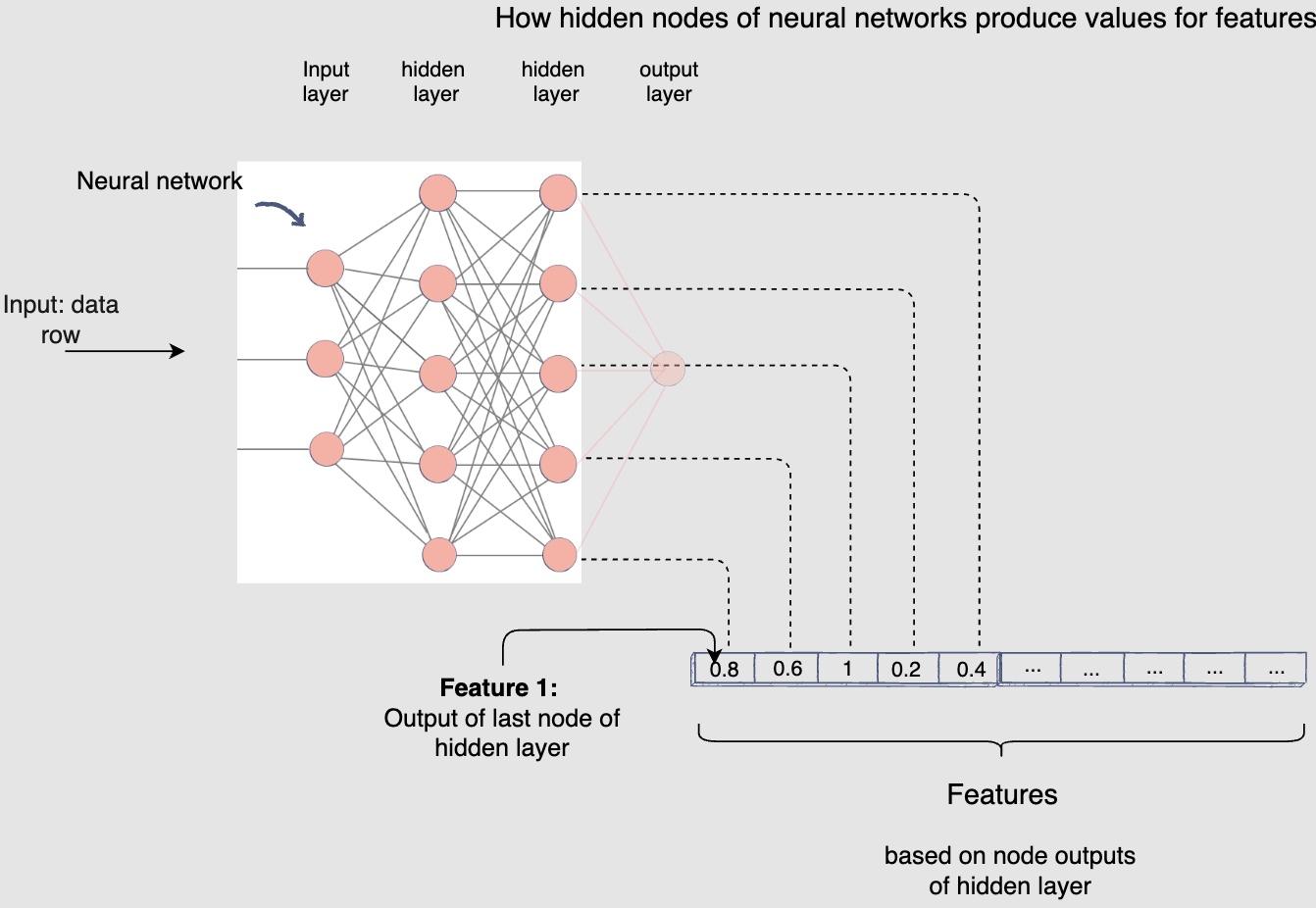 Logistic regression can be easily used for changing the model online, based on real-time user interactions that happen with the posts. This helps the model to re-learn the weight of all tree leaves as well.

Why do you need diverse posts?

This scenario remains the same for any modelling option. 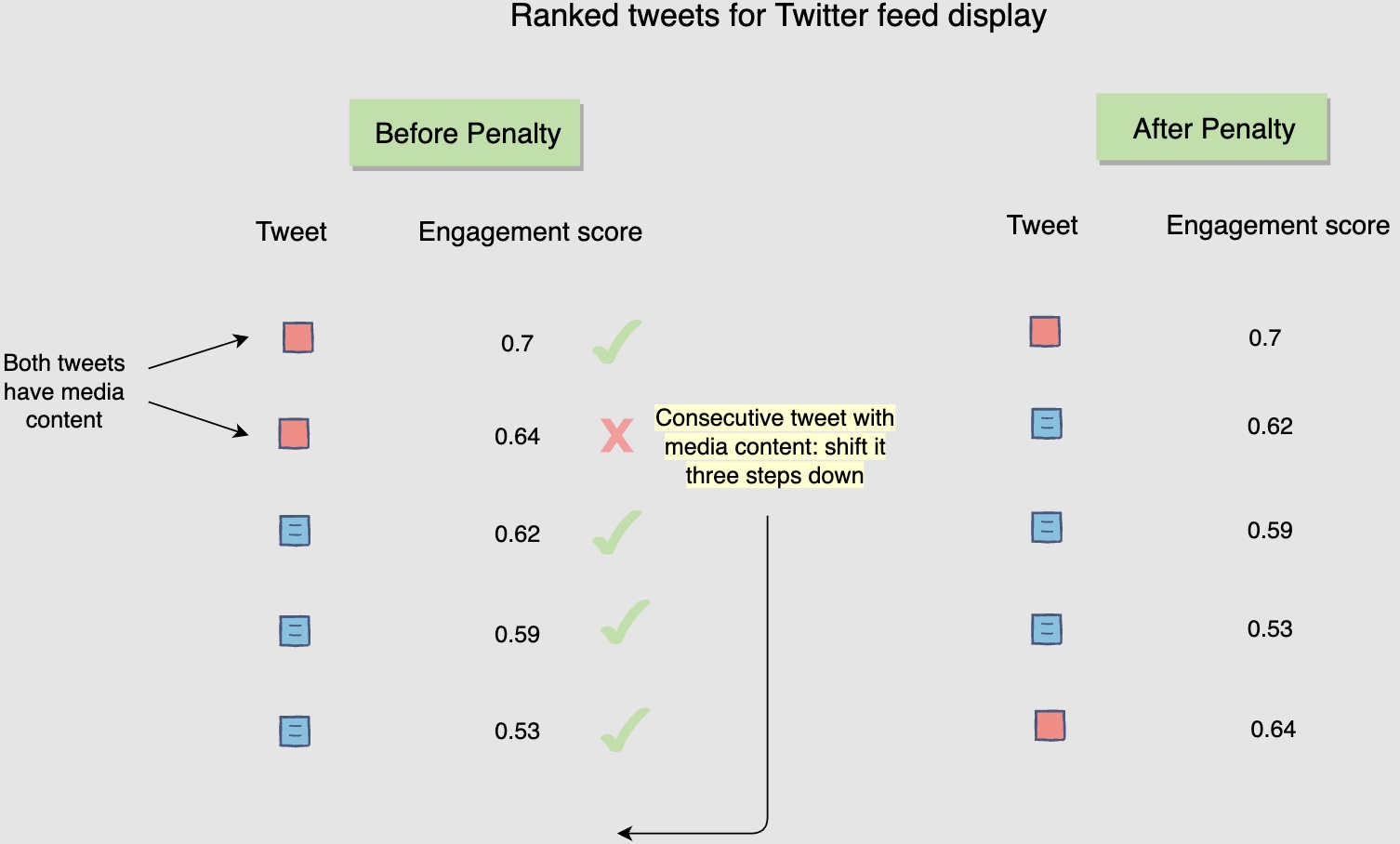